For quite awhile now I have wanted to learn colorwork. One of my dream projects pretty much since I began knitting is the Deep V Argyle Vest by Eunny Jang. Obviously that is a pretty ambitious project for a newbie so I decided to start smaller. A few years ago I came across the University pattern by Tin Can Knits and added it to my queue. This year for the Ravellenic games I decided to finally cast on (Ravelry). Two months later here is my progress. 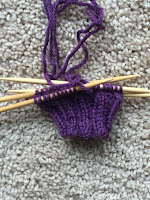 Yes that is only the ribbing. Yes this is the first mitt. I have made mistakes on the colorwork pattern two times and had to rip back. I am determined to finish these and I will not be defeated! Knitting I am the boss of you not the other way around! Until next time ....
Posted by Crazy Knitting Fool at 10:32 PM